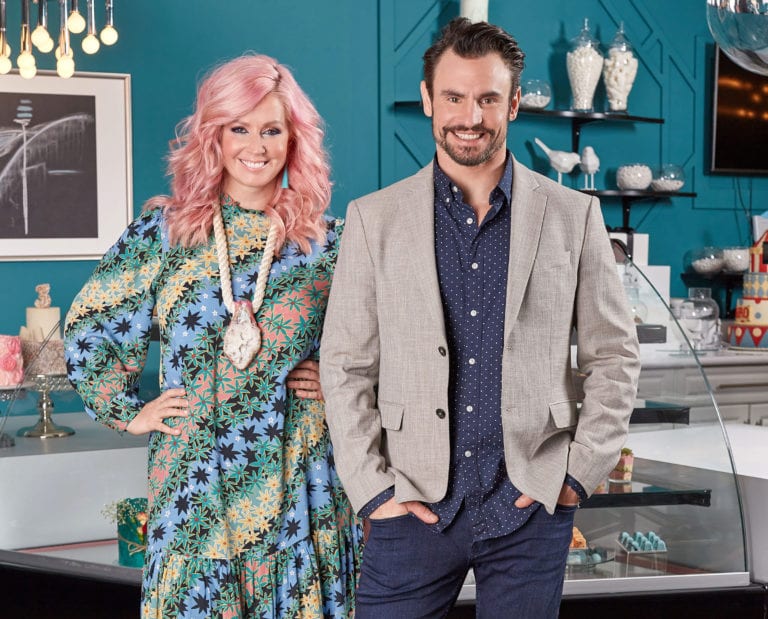 Steve Hodge, chef/owner of Dundarave's famous Temper pastry shop, is hitting the big time with not one, but two shows on Food Network TV's popular channel.

West Vancouver’s own candy man and pastry chef, Steve Hodge, is now melting hearts as one of the Food Network TV’s newest and sweetest personalities. Owner of Dundarave’s beloved Temper pastry and chocolate shop, Steve is now starring in two television series – Project Bakeover (where failing bakery businesses get a helping hand) and the Great Chocolate Showdown (where contestants compete to win over the judges with their latest chocolate creations). Hear what’s it’s like behind the scenes as the cameras are rolling and the heat is on, in the kitchen.

2:00 How did you become a chef? You were on your way to career in business / commerce.

I never made it to the actual behind the desk. I quit my first day. I graduated with a business degree. And for some odd reason, I wanted to be a broker and I wanted to go to Wall Street and I wanted to trade on the floor. And it literally took two buddies I spoke with, who are actually now in Hollywood, and one of them’s quite a well known actor, to convince me ‘Hodge, what are you doing? That’s not your personality’. I took a year off the university and worked in in Hollywood and kind of figured out what I wanted to do. And I fell into cooking. I didn’t know I was going to be a pastry chef or a chocolatier. I just thought I was gonna be a cook, Chef. And, you know, you run into opportunities. And one of them was a chef I was training under and I asked him a question about a pastry thing I saw on a book. And it was almost like a challenge. And he said, Oh, no, that’s at a different level. And it kind of caught my eye and I was like, wanting to try it. And I tried it in culinary school and I never looked back. I fell in love with pastry.

4:50 There’s an art to being a chef. Baking is different than cooking. Tell us why you choose a pastry chef. Tell us about some of the science.

I never paid attention in science class in high school, but for some reason I really enjoyed the science side of it. So it wasn’t understanding, okay, you add this ingredient to that ingredient and this reaction happens. What I love – the challenge on what we do in chocolate and pastries, is your environment. So even though I have 20 years experience, or you can have 40 years experience, you’re always faced with the environment around you on a daily basis, whether it’s raining out whether it’s sunny out, and that affects how you bake. How you proof a croissant, how you temper chocolate. And that’s the challenge I like – so every day is different. It’s not like throwing sauteed onions and garlic and celery every day. That doesn’t change. But when you’re working with chocolate, let’s say it changes every single day.

7:10 Opening a business here in West Vancouver. Tell us about the process. Who are your partners. How do you make it happen.

I do have a business partner – it is my sister Kristen and I literally wouldn’t have been able to do it without her. She deals on the financial side. She’s the numbers person and then with our experiences coming together it really works. So I’d love to take credit – but if she’s listening to this right now, she would kill me if I took full credit.

So when we opened up Temper you know obviously we had a vision of what we wanted to make and carry and offer to the our clientele, but we wanted to have fun with it. It’s kind of like the name ‘Temper’. I never wanted my name because it’s it doesn’t sound really French or sexy.

8:40 How did you come up with the name of your bakery Temper? And you have some special items named after you daughter. Tell us about this.

I wanted to play on words and to have fun with it. So, you know, obviously it’s named Temper because in everything we do in cooking we have to temper things, especially on the pastry side. We have a play on words with chef’s temper temper tantrums and we have fun with that. So then we said let’s have fun with the food. So instead of naming like traditional things, we use traditional recipes and then do our twist on them. So when my daughter was born, I mean from the day she was born she was a firecracker. So that’s how we came up with the Charlie bite. Funny enough, the Charlie bite became the most popular thing we do. It was our take on a cinnamon bun, but with croissant dough, and it started with when we would make croissant. We have scrap leftover dough. And obviously, as a chef, you don’t want food wasted. You don’t want to throw it out. So we just incorporated some flavors into it. And then rebake those scraps. Well, they became so popular, we now make those for the Charlie bite.

There’s a story behind everything. Two of the popular items we sell are actually from my mom’s recipes.

11:25 You’ve worked with famous chefs, and now you have become a famous TV chef yourself with two shows on FoodTV. Project Bakeover and Great Chocolate Showdown. Tell us about both. How were you ‘discovered’?

Oh, two completely different shows. One is a studio show, which is the Great Chocolate Showdown. And then one we’re on the road for a traveling show, which is Project Bakeover.

Everything happens for a reason. I didn’t go out and look for TV. We have a fabulous PR person, Michelle Lan, and she would put us on the news. And it just happened that someone watched the news in Toronto. And they contacted us at a production company and they said, ‘You know, have you ever thought about doing TV?’ And we got into negotiations and now we have the two shows. My co-host on Project Bakeover is Tiffany Pratt, and she’s uh she’s been on HGTV for 10 years. Then I got thrown into a Great Chocolate Showdown with stars like chef Anna Olson, who’s a legend in Canada, and you’re kind of nervous.

16:10 Tell us some secrets from TV. How ‘real’ is the reality show Great Chocolate Showdown? Has there been any disasters for the contestants. Is it a real competition? How much is scripted? How much is live?

They have a term in TV called ‘hurry up and wait’ – but in the Great Chocolate Showdown, when you see the bakers have two hours on a bake, that is absolutely real. Obviously cameras have to move, so if your cameras are facing us and we say something, then they want the shot from behind, so then we’ll have to get up to reposition to get that shot. But the actual baking is real and it’s stressful for the bakers. And there are culinary producers on the floor that are pushing the contestants and reminding them they’ve got 10 minutes left, or ‘you better be focusing on that’.

The contestants stress themselves so much. It’s actually quite funny to see because a lot of them actually have a background and practice at home before they come on the show – and they can cook. The one thing they always forget is time management.

20:25 You are a judge – but would you ever like to switch sides and be a competitor?

I actually once said we should have a competition where the judges have to compete, and my producer just said ‘no way – absolutely now’, because it would be too stressful, and we’d probably mess it up.

21:10 What is the best part of filming a show – and what is the hardest part?

For me, the best part of filming on both shows was the people that I was surrounded with – working and learning from them. We’ve become lifelong friends. And not just the people who are on TV. The camera guys, the floor runners – it’s like a family unit. And so when we’re not on camera, we’re all messing around. And we’re all joking. And for me, that’s like the kitchen.

I would say the hardest part for me on the filming, is when those cameras are on, and it’s go time, you have to be on point. I learned real fast after season one, we’d have to do a lot of lines at the end, and I love to joke. So I was taking it serious, but joking the same time. But you have to be on point. I don’t get nervous, but I just want to do it right. I know when I mess up and it eats me.

I have no clue. I know that before when this last block of filming in the fall – because of COVID we were in a bubble – so I didn’t see the family. And that was tough. That was tough on all parts of the family because obviously I’m not there and the kids are at school. Literally I wouldn’t be able to do this if it wasn’t for my wife Laura. She’s super mom. I think that’s the tough part because she even did the calculations and said ‘you realize last year you were gone eight months’. So that’s gonna change. But as far as the shop I have, I have an amazing team. Actually, my manager Carrie, she runs the shop. The shop couldn’t run without her. And then my chefs are amazing.

24:50 When you do get to be yourself, what do you cook for your family. What do you eat? What is life like when the cameras are off?

Okay, so unlike probably like how you grew up or I grew up – you know what my mum made we ate and we sat down at the table . . . that doesn’t exist in our household my kids. My kids live off of Kraft Dinner and that’s about it every night. But Laura and I cook and we do a lot of salads – but we love doing Mexican food at home. That’s our go to. And we make we barbecue all the time as well.

I’ve been teaching the kids a lot too actually, and I do a lot at home now with pasta but we do it from scratch. So I’m teaching Charlie my daughter how to make pasta. And just really simple dishes – but we try to eat really healthy at home too.